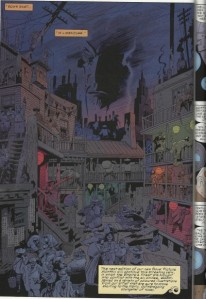 After some amount of time flipping through the pages of this graphic novel, I arrived at this deeply interesting panel. This panel is the first panel in which the Limehouse district is visually introduced to the reader.  To begin, the scenery in the panel is dark and dreary, thereby giving the reader the impression that this area isn’t a particularly good area to live in. Furthermore, the sky is filled with a face that is presumed to be the face of “The Doctor”. The face is not meant to be taken literally as being in the sky, but rather it helps to emphasize the fact that “The Doctor” oversees the district, acting as its crime warlord.

The next items that stood out to me in the panel were the smokestacks coming from the houses and pollution in the sky.  Following the norm in most steam punk fiction, the pollution indicates a critique of the over-industrialization of the city by showing one of its negative effects on the environment. Also, in the top left corner, two workers are working on repairing a phone line in a very precarious manner. Herein lies another critique of the over-industrialization displayed in most steam punk fiction, as the safety of the workers is not put into consideration, and they are viewed simply as a means to the completion of industrial projects.

The panel also contains some racism, specifically against the Chinese. First, in the bottom left corner, three Chinese men are displayed with slanted eyes and stereotypically Chinese headwear. Moreover, these men are robbing an unconscious man lying on the ground. In addition, in the middle-bottom right corner of the panel, a Chinese man is karate-kicking two other men while raising his sword menacingly at them. Although the racism throughout the graphic novel is not meant to be taken literally, the panel does demonstrate the stereotypes about the Chinese, and it portrays them in a very negative manner.

Next, the housing of the district is extremely broken down and ragged, and beggars can be seen in various parts of the panel, such as in the bottom right corner, thereby displaying the district as a very poor area.  In addition, a brothel exists right next to this beggar, and naked men and women are shown on the decks of this building. There is even a depiction of a woman beating on a man in the center of the panel. These examples portray the district as a fundamentally immoral and flawed neighborhood that thrives on vice and crime in order to survive.

All of these examples come together to show that the Limelight district is a seedy, dark, and corrupt location filled with evildoers, prostitutes, and violent individuals. By showing  “The Doctor” in the background overseeing all of this activity, he is thus also characterized as an evil and corrupt individual. However, the panel also critiques industrialization by displaying many of its negative consequences.  These characteristics help to influence readers’ opinions later in the novel, thereby increasing the panel’s importance.

One thought on “Limehouse”