Over the break, we were asked to play Gone Home.  Unfortunately, due to extenuating circumstances, we were unable to talk about it much in class, which is a shame, since this is one of my favorite games that we have played for the class.  One of the things that made me enjoy the game was its unique style.  At first glance, the game appears to be a horror game; your character, Katie, arrives at her family’s new house (dubbed the “Psycho House” in-game) in the dead of night while a storm rages outside.  What’s more, no one is actually in the house besides you, which is both very isolating and dark, as no people means very few lights on in the house.  As you continue, you find creepy hidden passages and even a very small sub-plot involving the alleged ghost of the previous owner of the house, Oscar Masan.  However, these horror elements are not the main focus of the game. 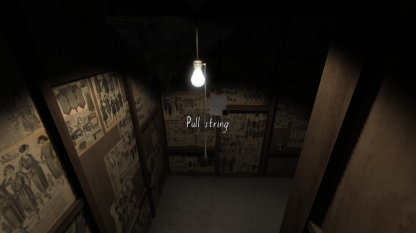 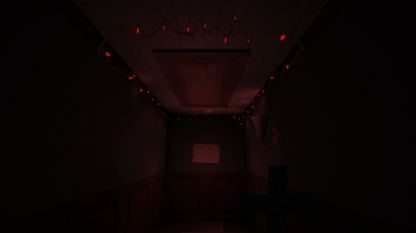 The entrance to the attic The ghost of owners past

Instead, the focus of the game is on the true protagonist, Sam, and her relationships: to her sister (the character you are playing), to her parents, and most importantly to Lonnie, a girl who Sam eventually enters a romantic relationship with, leaving her homophobic parents’ house to join Lonnie in Salem, Oregon.

These two different types of games-atmospheric horror and character-driven walking simulator-seem somehow at odds at first, since the stereotypical demographic of those two genres are so different.  However, the horror elements of the game actually heighten the player’s experiences with the character-driven portions of the game by providing tension throughout the game.

First of all, the tension the horror provides gives players a reason to be engaged in the game.  Exploring a normal house is boring, but exploring a dark, abandoned house that might be haunted by a sinister being is more compelling.  This is especially important in the early game where the horror is most prevalent, since players have not developed a reason to care about Sam yet.  As the game goes on and it becomes more clear that Gone Home is not actually a horror game, the player’s (theoretical) interest in Sam’s story is enough to carry them through to the end.

More importantly, however, that tension allows players to get into both Katie’s and Sam’s heads.  For Katie, the reason is simple; imagine you came home to a house you have never been to before late at night.  Your family, who you expected to be waiting for you, is nowhere to be found, it’s storming outside, and the lights in the house keep flickering.  Being slightly scared is expected in that situation.  However, this tension is also mirrored in Sam’s experiences as she writes them down in her journal.  While large parts of Sam’s journey of self-discovery are fun and exciting, she also has to deal with unfamiliar, scary situations-just like you, the player, are dealing with.  Sam has no support system outside of Lonnie since she has just moved to a new school.  She knows her parents will be unsupportive, and her only possible familial help, Katie, is away on a year-long stint in Europe.  Sam is exploring uncharted waters where even usually welcoming sights can be dangerous, just like the player is.  By including these horror elements, the game makers are also including a pathway into Sam’s own experiences.