Racism and stereotypes are things we cannot avoid. Our bodies make snap judgments based on peoples accents, religion, and physical appearance without conscious cognitive reasoning. The thing that novels without pictures struggle to encompass, is that first snap judgment, or take in of an entire scene.

We spoke in class about how the racism that is pervasive through out the League of Extraordinary Gentlemen in some ways takes away from the book. While I do think using the name “Johnny Chinaman” does not add any substance to the graphic novel, I think in some ways Alan Moore’s use of racism and bluntness does.

Multiple times throughout the graphic novel Moore expresses that this “comic book” is not meant for children. It is a graphic, brutal story geared towards adult readers. These adults should have already formulated opinions on race strong enough to at the very least not be swayed by a comic book, and thus readers will be accepting what they see as a form of media and not as truth.

The scene that best utilizes racism and callousness to add to the novel is when Ms. Murray ventures to Cairo to seek out Quatermaine. Upon entering the building wherein he is staying, Ms. Murray is confronted by an almost alien scene. The bar is packed and thick with dark shisha smoke. There are no women and none of the men seem friendly at all. In fact, they fit the exact Arab stereotype that makes some of us as Americans uncomfortable. In the dark room they all wear turbans or little hats, wear the thin mustache and heavy beard and do not speak English. Ms. Murray is wearing proper English lady attire and is easily recognized as out of place and not belonging there.

The stark contrast of Ms. Murray and the men around her and the use of racism provide a powerful visual message. Upon entering the bar, we can see that this place is alien, it is different and potentially harmful. There are no allies in this place of people so different from her, and she is not safe. It illustrates the intensity of the position that Quatermaine is in and the lengths Ms.Murray would go to find him.

In the frame I chose, Ms. Murray is being raped. In this foreign, unsafe place she is forced to the floor and has her legs spread. In the frame one can see the man’s naked but as he prepares himself to rape her while his fat brother holds her down. The men’s faces are totally unconcerned or afraid or merciful. Once again, before reading this book we were warned of its illicit material.

This scene is incredibly disconcerting to put in words, but to see it on paper, in color, to a woman whose character has been developing? Far worse. However, I think that that is a good thing. Rape is a very disconcerting thing, and we should not take it casually even when we read it. Too often now in books do we read of massive amounts of civilians dying without pause to think of each of their families- the widows and the orphans. It is so easy to just keep reading, “what is going to happen next”? Between the two frames I have discussed, one can see how hopeless and afraid Ms. Murray, how dire her situation is and better relate to it. If the first frame was brighter, and the men there looked more decent and less foreign maybe Ms. Murray could have called for help, or maybe even she could expect that these men would be punished for their crimes. If I only saw a shadow of her about to be raped, I would not have fully grasped how invasive they were being or the closeness to which they came to being successful.

All in all in this set of frames the racism help build set the tone of the scene, and better let us relate to the character and her situation.

This is not just a comic book… it’s a graphic novel. 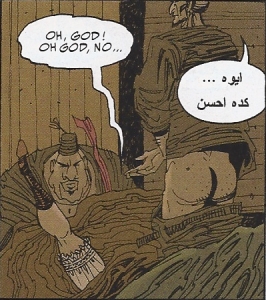 As children, I would hazard a guess that most of us read a comic book at some point or another. Why? Comic books are meant to be entertaining. They don’t need a terribly deep story line or minute references to real people and events or social commentary to achieve that point. But can they?

If you’re name is Alan Moore, you clearly thought that they could. And thus we have the graphic novel (as one would call a long comic book with substance such as this) The League of Extraordinary Gentlemen. Now, graphic novels usually get bad press in the academic world because of their similarity to comics. But a look at just one panel of Moore’s novel shows that it has much more meaning colored and shaded into the frame than a comic and provides as much, if not more, detail as a normal book would.

“Wait, that’s the book you were talking about?” Said a friend when she saw The League of Extraordinary Gentlemen by Alan Moore sitting on my desk. “That’s not a book; that’s a comic.”

“It’s a graphic nov” I managed to say, before she cut me off—“Tell me when you have some real reading for class.”

Graphic novels aren’t widely accepted as scholarly work. They are usually seen as picture books for kids, or as comics for “nerds” without value. I’m here to tell you that great graphic novels are as substantive and worthwhile as great novels, the same way a a movie can be. Below is a single panel from The League of Extraordinary Gentlemen. The attention to minute details, and the plethora of fantastic allusions made in this graphic novel truly set it apart from a mere comic book.

This is one of four small panels, next to a large, page and a half panel. In this almost inconsequential panel, Moore gives the reader so much.

In the foreground there is a ragged, obviously poor gentlemen and a few boys dressed similarly. The details incorporated immerse the reader—the fingerless gloves, the cigarettes, the wart on his nose, and so much more. His low class and that of his young companions is affirmed from the way they talk. In the mid-ground there is a burning building and smoke. And In the background a flying ship can be seen bombing the buildings of London (the cause of the building fire.) This is what is understood at face value.

Now, onto the good stuff. In this panel on of the young boys refer to the older, ragged gentleman as Mr. Dodger. In the panel above this, the same boy tells Mr. Dodger that he has stole Mr. Quartermain’s purse (or “is tart’s purse.”) This automatically reminds any of us who have read Charles Dickens’s Oliver Twist. This Mr. Dodger, is none other then the skillful and cunning Artful Dodger grown up. It seems he has started a gang of pickpocket children as well.

Moore also included another quick allusion. Mr. Dodger refers to one the boys as “Mitchell,” and the other as “Watts.” A quick google search of “Mitchell and Watts London” brought up the EastEnders Wikipedia page. Having never seen the show, I do not fully understand the reference, but the show, taking place in the East End of London, is about the Mitchell and Watts family. Although a bit anachronistic, it makes sense that these two would be in the east end, the sight of the bombings. Maybe these two are the ancestors the two families.

Finally, the flying ship in the background is the quintessential representation of steampunk technology. This great advancement which has the power for so much good, is also the source of so much destruction. This theme of the duality of technology is prominent throughout many steampunk novels.

The above was one panel. The League of Extraordinary Gentlemen is full of allusions and symbolism that makes it worthy of being called a a true graphic novel.