Storytellers struggle to make whimsical what the world makes dull. We foster deeper understanding by exaggeration, by parable and metaphor, or by creating what we wish were happening when it really is not.

When renowned English texts like “Ulysses” by Lord Tennyson and Sir Gawain and the Green Knight begin with lamentations of the lost grand empires of heroism, I have to stop and think for a second…

Oh, that’s right! Storytellers…generally don’t care for reality. As a matter of fact, we generally don’t know what we’re talking about. The trick of our craft is to pretend that we do.

Great storytellers exist because they are excellent observers, synthesizers and masters of their chosen method. Accuracy doesn’t fall into one of those requirements. Therefore, we can make an educated guess that epic storytellers like Homer of The Iliad weren’t on any battle fields whatsoever. So when we interpret Lord Tennyson’s poetry as commentary on how heroic lifestyle has disappeared in the Victorian era and been replaced by a more docile life, well…there were plenty of wars in Tennyson’s time to choose from. But because in real life there’s no Achilles waiting in his ship to take the Trojans down single-handedly, real wars always seem a little less awesome. In real life, men die without favor, without magic powers, and without luck. In real life, no one has the right to say that the man who died just wasn’t heroic enough.

The storytellers sitting behind computer screens are kind of in the same boat as the Homers. Though I recognize the extent to which storytellers go to experiment and experience the stories they create, sometimes we’re just full of it. So when we then sit before our digital playthings to exit our lackluster lives and take up the rifle of the bludgeoning Master Chief, update our Champion’s reputation in Middle Earth, or chase our interstellar Destiny, maybe the desire to be heroes comes from our pure lust for fantasy rather than nostalgia for the heroism of the past.

Games like Halo and Destiny put an interesting twist on this theory because they take place in futuristic settings. It creates a discourse with heroic civilizations of the past, posing a “heroes yet to come” question. However, it still leaves us sandwiched in the middle, as if we’re all just weaklings living safely in our double lives. Yet when we place the “glory days” in actual historical context, we find that those who lived in those eras would have rolled their eyes at our perceptions of grandeur. In my Classical Literature class we watched “Medieval Lives” where Terry Jones informed us that the great chivalric code of heroic knights was really just an attempt of the authorities to control what became a steel-clad blood-thirsty army. So NOT heroic. 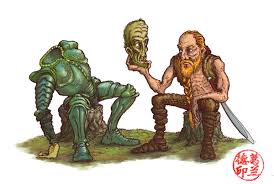